Savoir-faire des Takumi is a collaborative project organized by Ateliers de Paris, France and the city of Kyoto, Japan. Semeur d’étoiles took part in this project and co-created a Japanese-French piece.

From day one, our Japanese-French encounter was as evident as the reflection of the moon (Lune) on the sea waves (Ondes). Because however distant we are, we both stare at the same moon in the sky. That is why we decided to create two pieces that are beautiful alone; and even better when combined. We used materials we master best and that are our signature: urushi lacquer for Keigo MIKI and blown glass and LEDs for Ludovic CLEMENT d’ARMONT. The light of the moon reflects into the urushi waves, combining the two art pieces into one. 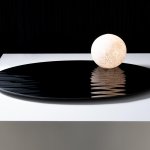